In deciding how to vote in our August 11th primary election, many of us are faced with a dilemma.

It’s due to our widespread use of plurality voting in which the candidate or candidates with the highest vote totals, but not necessarily a majority of voter support, go on to the general election in November.

Do I vote for the candidate or candidates I like best, or should I narrow my option(s) to choose among only the candidate(s) I believe are most likely to be elected, so I don’t waste my vote? Our present way of voting in Vermont can and likely often does result in our electing candidates that a majority of us would not necessarily support, and this increases the political division and partisanship we see in our American politics today.

Unless choosing among only one of two candidates, we face this dilemma every time we vote, whether in the primary or general election for electing our US President and Vice President, US Senators and Representative, our Governor and all other state and local representatives. If I vote for my first choice, will I actually help elect my worst choice?

This dilemma applies across all parties in all elections. However, this year’s Democratic primary ballot in the Chittenden District to select among 13 candidates to fill 6 Vermont Senate seats provides an extreme example. Four current Senators are up for re-election and thus are better known to many voters. But there are many potentially well qualified alternatives in the race. If 100 percent of votes were equally divided among all 13, each candidate would receive less than 8 percent of the vote. This hardly indicates that a majority of voters would support any particular candidate. When the actual votes are counted, the 6 with the highest number of votes will go on to the general election in November. However, with so many candidates, it’s highly unlikely that any of the six will obtain a 50% majority of the vote. Most of the six winners will be nowhere near 50%.

Whether locally, statewide or nationally, our present plurality-based voting system works in ways that undermine, rather than strengthen, our democracy. It helps to elect leaders with a passionate but minority base of support, that a majority of voters might never approve of. As voter interest and participation drops in elections, it makes it easier for the passionate minority to win. It also provides incentive for the passionate minority to “game” the system to their advantage by, for example, limiting voter turnout by others who might vote differently.

This system of electing our representatives with a plurality rather than a majority of votes is one, though not the only, big reason our country is so ideologically divided and our federal political system has become so widely viewed as dysfunctional. It doesn’t have to be this way.

We can and should instead strengthen our democracy by adopting a method of voting that ensures that each of the candidates we ultimately select, regardless of party or ideology, has a majority of all voters in support. This can easily be done in an election by using ranked choice voting. This popular electoral system allows voters to rank candidates by preference, meaning they can submit ballots that list not only their first-choice candidate for a position, but also their second, third and so on.

At a time of great national political division and discord, it’s time to strengthen our democracy in a wide variety of ways to better serve our broad public interests. Adopting ranked choice voting is an important first step. 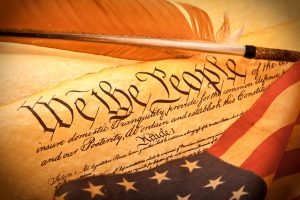 Participate, collaborate and analyze: It’s important to all, regardless of ideology.

Our Founding Fathers signed the Declaration of Independence from Great Britain, fought a war, and founded our country, largely over the issue of improper representation. Subsequently, they drafted our Constitution to better provide this representation. So how are we doing today?

We’ll discuss why large numbers of Americans feel we have major, well documented, problems with the structure and financing of our political system that combine to result in improper representation of broad citizen interests by Congress.

You’ll each be loaned iClicker devices to record and present collective audience responses about the following and more:

We all have an interest in getting this right, so please come and participate.

Answer: Yes. Voters are upset! Americans of all ideologies have lost confidence in our election process, and Congress’ and the federal government’s ability to properly serve its citizens. We founded our country over this very issue of improper representation.

Answer: Other proposals are too narrowly focused to correct the multiple problems that exist.

Answer: Theoretically, but it hasn’t happened for the 40+ years I’ve been watching, and that’s for good reason. It’s not in Congress’ interest to reform our political process to give all citizens more choice and control over how our political process serves us. Members of Congress and their benefactors benefit from prioritizing their interests above ours.

Answer: Not likely. Again, it’s not in Congress’ interest. If they do anything, they’d most likely propose certain less critical changes that, if enacted, would benefit their interests, but not our broad citizen interests. Doing so would allow them to say: okay, we’ve now dealt with that. Let’s move on, thus putting off real reform efforts for perhaps another decade or two.

Answer: Because they were convinced that some day, if Congress was the problem, and it was collectively acting to prioritize its interests above the interests of all American citizens, Congress would never act to properly reform itself.

Answer: No. With few exceptions, we elect good people to go to Washington to represent us. But once there, they exist within a political system that provides them with strong incentive to prioritize the interests of others above our own. It’s a system problem.

Answer: Our Founding Fathers provided a second way, in Article V of the U.S. Constitution, for us to act when Congress won’t. Through our state legislatures, we citizens can initiate a constitutional convention to propose needed amendments that will go into effect once ratified by 38 states.

Answer: Sure, there are both risks and rewards. We must weigh the risks against the rewards we all receive from correcting our broken political system.

Answer: No. The problems addressed by The Democracy Amendments have existed for decades, long before the U.S. Supreme Court’s decision in 2010 made these problems even worse.

Answer: Plenty. Don’t wait for others. Here are some suggestions.

INTRO:  Commentator Rick Hubbard considers the question: If we amend our Vermont State Constitution so we, not the legislature, elect our next governor; should we elect with only a plurality, or with a majority of voters in support?

The practice of allowing our legislature, rather than Vermont voters, to resolve an inconclusive gubernatorial election is a vestige of power originally reserved to our Legislature, then largely white, male property owners, when our state was formed. I think it’s time to amend our State Constitution to always have Vermont voters complete the process.

But if we do this, we’ll have to choose whether to ensure that our next governor is backed by at least half of all voters casting ballots, a majority – or whether it’s better to select whichever candidate gets the most votes, a plurality?

We’ll have to decide which approach best strengthens our political process to serve the interests of all Vermonters?

Our recent November election provides a good example of this. END_OF_DOCUMENT_TOKEN_TO_BE_REPLACED